You Have All Winter 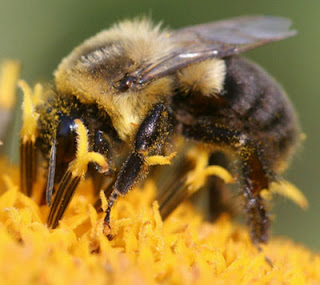 Plan for insects. This winter, as you dream and plan for next year's garden, think of plants that insects will like. Introduce into your garden as many native plants as you can to ensure that the insects are fed.

Don't want insects in your garden? Think on this: most baby birds depend on insects for their growth. If parent birds can't find enough insects, the babies are weaker and may not survive. And we depend on insects to clean up the rubbish of the world and to pollinate our plants for next year's growth and this year's food.

And, of course, bees (my favourite insects) pollinate plants to make sure fruit and seeds are produced.

Expect insect bites on your plants. When you see bites, you know the system is working. The more bites, the healthier your garden is. Encourage insects to your garden by providing habitat for them. Here's one of my favourite pages for insect habitat:
Posted by Carol at 8:10 AM No comments: 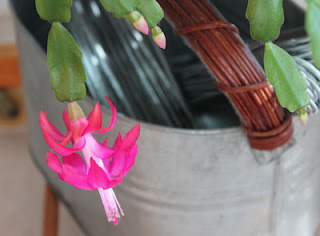 Christmas is almost here when the buds swell on the Christmas Cactus.
My Christmas Cactus is an older variety with stem segments (phylloclades) that undulate gracefully instead of ending in little points along the edge and is probably Schlumbergera x buckleyi.
The Christmas Cactus I have now is not the original one I inherited in 1976 but a cutting of a cutting of a cutting. Once every two or three years, I take cuttings, choose the best of the rooted cuttings, and discard the mother plant in favour of a smaller one with a less sprawling spread, a new plant that fits in the spot allocated to it.
My cactus actually blooms at Christmas unlike many store-bought cacti that should more accurately be called Holiday Cacti since their natural bloom time may be Thanksgiving or Easter, instead of Christmas.  Those cacti with the flowering blooms we purchase in Fall/Winter have been forced to bloom.  Their natural bloom time won’t be obvious until they have grown for a full cycle.
I keep my Christmas Cactus in our back sunroom, lit by natural light only, cooled in summer by open windows and barely warmed in winter by one hot air outlet travelling under the room across an unheated, dirt-floored crawl space, losing much of its heat before it enters the room. The room gets quite cold but never freezes.
My plant sits in eastern light that is also perfect for African violets and is exposed only to available light and the temperature changes that follow the season by diminishing as Christmas nears. Bud set, beginning somewhere around the first of November, is spurred into action by those seasonal changes, a lessening of available light or a reduction of temperature or maybe both.
Christmas cacti are very sensitive once they begin to set bloom and should never, never be moved once bloom set has begun. Changes to light or temperature will cause new buds to drop.
At one time I used to transfer the current Christmas Cactus to a shady spot outside – a holiday for the plant.  One year I almost lost it when I forgot about it and left it outside until after the first bad frost.  When the plant was brought in, all the stem segments shriveled and died but the main plant was OK and eventually put out new stems.  There was no bloom that year but the plant lived to bloom again the next year.  Since that almost death of the plant my memory has not improved so the plant resides inside all year.
After so many years of predictable show, my Christmas Cactus is an old friend giving me the feeling that all’s right with the world when the Christmas Cactus blooms. 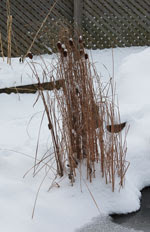 Winter is here and it is beautiful. I don't cut plants down in the fall and am able to enjoy their forms when the snow comes.
This dwarf bulrush grows at the side of our pond. You hardly notice it in the summer but it is a wonderful sight after the snow falls. It will stay that way most of the winter, feeding small birds and enhancing the garden.
Until they soften and fall, the remnants of our plants feed the birds. Then they feed the soil. It's the way it was meant to be.
A friend once commented: "Your garden isn't your livingroom. Leave it messy." She didn't see my livingroom!
Posted by Carol at 8:09 AM No comments:

Graceful Even in the Fall

Hakonechloa grass is one of my favourites. It seems to flow over whatever surrounds it. Although it isn't a native Ontario grass, I grow it because I love it so. This clump is about 6 years old and really does need dividing and replanting. I noticed last spring that the centre is becoming bare. So now I'm looking for another place that would be improved with the flow of a yellow-green grass all summer and the jolt of autumn colour next fall. 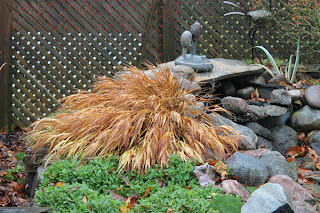 Don't you just love the last roses of summer? The colours are so vibrant, as if wanting to imprint the image in prep for the long, cold winter.

This rose is a polyantha called Ballerina. It blooms steadily from early summer until, well, now. No diseases, no naked lady syndrome, just blooms and blooms.

The rest of the garden is pretty well done except for a couple of geraniums which refuse to let a little cold bother them. I got the geraniums as Ego's last spring and have been delighted with them ever since. They don't grow oversized but bloom and bloom and bloom in the most wonderful red.

The Autumn Crocus and the Colchicum are lying in disarray now. They lasted two weeks and I felt so lucky. They are such a lovely surprise toward the end of September.

Did I tell you that I haven't gardened this year? I was so disinterested with gardening and my garden shows it. Ah well, there's always another year, isn't there. The rose and the colchicums have revived my interest. 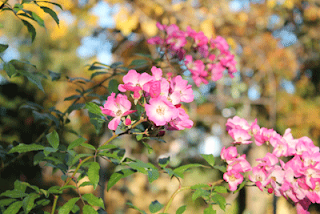 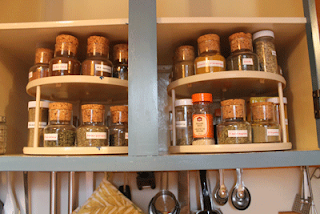 Everyone has waterfront property. What we put on our lawns and what builds up in our curbs eventually ends up in our lakes and rivers. The leaves in the curb leach phosphorus that runs through our sewer systems and on into our waterways. Our city helps by cleaning the streets often. We can help by watching our curbs and doing a bit of clean-up ourselves. It rained cats and dogs today. Here's what has collected at my curb and sewer inlet. 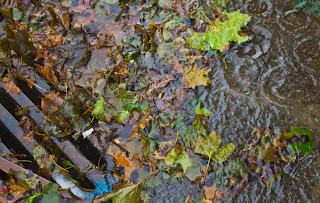 Small Is What I Got 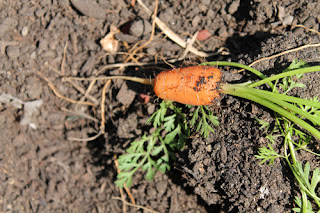 Small is what you get if you don't thin your crop.  We seeded too many and then didn't have the heart to toss the little guys out.
Tonight we're going to have 25 little carrots for dinner.

There's more to this veggie gardening than meets the eye. You either thin carrots as they grow or as you eat them! Is there a life lesson here? 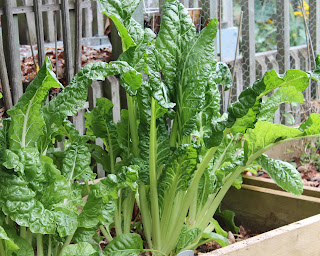 Times are changing.  Gardening now includes eatables.  In my son-in-law's backyard, we built 7 boxes and are veggie gardening in raised beds.  Here's a picture of our Swiss chard.  Isn't it lovely?

1.  Veggies are meant to be harvested.  In my flower gardening days, I seldom picked.  I like the flowers where they are planted.  Not so with veggies.
2.  How many tomatoes and zucchini can you really eat without getting tired of them?
3.  Thinning is important.
4. Spacing is an important skill.