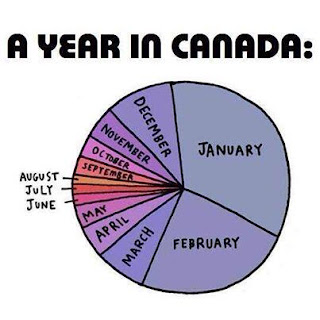 No southern sojourn for us this winter.  For 10 years we've hidden from winter under a Floridian sun, done our duty at Floridian golf courses, and commiserated with non-travelling relatives and friends about the snowy weather predictions from home.  This year is different.  For whatever reason -- the drive, the drop in the dollar, the political climate or perhaps some other subconscious factor -- we both decided to stay home, to spend the entire winter in Canada.

A year in Canada is not reminiscent of a Year in Tuscany!  In Canada we have the usual seasons: Winter from December 1 to February 28, Spring from March 1 to May 31 and so on, but that's not the whole story.  We also have weather, capricious and fickle weather, disobedient of seasonal rules, pouncing on the countryside with little warning. Weather is shirtsleeves in February and parkas in April.

Our weather most often comes from away, eastward from the prairies, down from the Arctic or up from the Southern USA, bringing rain, or snow or sun to Ontario on its way to the East Coast.  It's the dip in the Gulf Stream, the cyclone in the Pacific, or the hurricane in the Gulf of Mexico pushing temperature changes and precipitation across North America.

Last night we had weather, cold weather, cold enough to freeze fingers and toes, a cold so penetrating that walkers hurried hunched against the freeze to home or work, to warmth.  Along with the cold came a blizzard, an all-night snow blowing horizontally and creating great drifts across the city and down the streets.  This morning the city was laden with new snow, drifted over, reference points disappearing in an all-white landscape, leaving no division for roads or sidewalks. Snowblowers were out in full force as drivers rescued cars from filled-in driveways.  Drivers who had already found their cars and freed them from their snow-cover were on their way to work, slipping and skidding down unplowed side streets like beetles in soap suds.

Our city does a good job of plowing our streets, but the order of plowing is main streets first and side streets later.  It usually happens that our side street is plowed in mid-morning, after the driveways have been cleared and drivers have left for work. The plow races down the street pushing road snow into mounds at the ends of freshly-shovelled driveways. When residents return home from work they need to tackle snow again -- road snow.   Road snow is different from blizzard snow, crusty mounds of road snow deposited by the plow, hard packed and turned to ice by traffic, mounds filling the bottom of driveways, mounds almost unmanageable for a snowblower,  mounds that, if not moved, may last until spring.

Keeping the driveway cleared may be the chore that sends most Canadians south, but when you're retired and possess a snowblower, a snowblower that starts in all weathers, a snowblower that moves itself on treads, a snowblower that blows snow well into the next yard, the snow really isn't such a big problem.  The urgency is missing.  Retirees can wait at least until the plow goes by or even longer.  Snow clearing can wait and be done at leisure and in fits and starts.

Those without snowblowers will find a myriad of people who will "do snow" for a price.  My neighbour hires a person who arrives after each snow with a humongous snowblower attached to a tractor.  He can clear her driveway, even the mounds from the plow, in less than five minutes. We haven't taken that option yet, but it's there.

I must mention that I don't do snow anymore, neither making snow angels nor shovelling it.  In our household we have an agreed-upon division of labour.  Mike valiantly keeps the sidewalk and driveway cleared while I cocoon and dream of seedlings and Spring.  Seems fair to me.