The Grasshopper And The Ant? 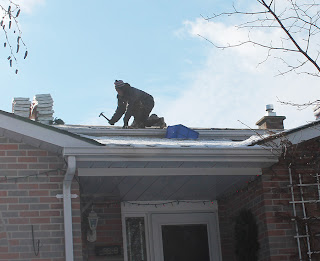 We feel a little like the grasshopper!  Our mutual roof has leaked during winter melts for the last couple of years.  When it's summer and there's no leak, we forgot about it.

As winter approached, we remembered the leak and decided that we should do something about it.  Would you believe they will shingle a roof in this cold weather?

This time we are having them put a membrane under the edges to prevent ice dams from leaking into the roof proper.  They are going to put a couple more vents in and reseal around the chimney.  The chimney, I feel, was the major culprit.

Poor workers having to be up on the roof.  Lucky us that they will do the job.  An ant would have had the job done in September -- the grasshopper, in December.  Happy Christmas.
Posted by Carol at 8:51 AM No comments: